The Echoing Story of the "Black Hole Sound"

In the past several months, there were two separate waves of media activity around “sound” from a black hole. As some readers of this newsletter may have noticed, these stories were based on Chandra observations of the Perseus galaxy cluster first published in 2003. Why were results from so early in the mission making headlines almost two decades later?

The story starts with a paper led by Dr. Andrew Fabian published just four years after Chandra launched. This paper discussed sound waves seen in the intracluster medium (ICM) of the Perseus galaxy cluster and included an estimate of the period of these waves. Working with Fabian and his co-authors, Chandra Press Scientist Dr. Peter Edmonds determined what the musical note would be in the sound waves traveling through the ICM: a B-flat more than 56 octaves below Middle C. We emphasized this was the deepest note detected from an object in the universe. The press picked up this interesting hook, and stories appeared around the globe in places such as The New York Times, National Public Radio, and The Times (London). The news of the “note” provided an opening for these popular media articles to cover some of the important physics that the Chandra data enabled.

More than a decade later, Chandra visualization scientist Dr. Kimberly Arcand started working with students at Brown University on attaching spatial sound to virtual reality. During the early days of COVID, however, when students and hardware were scarce, she turned to colleagues at SYSTEM Sounds whom she had met at a visualization conference a few years prior, Dr. Matt Russo and Andrew Santaguida. These two had begun creating sonifications for astronomical data such as the TRAPPIST-1 planetary system. Arcand wanted to adapt those techniques to X-ray data and to bring in members of the blind and visually-impaired (BVI) community for development and testing. This project was partly inspired by her work with Dr. Wanda Diaz-Merced, a blind astronomer who developed techniques to turn astronomical data into sound to enable her research.

Chandra’s first sonifications were published in September 2020, and, by 2021, the Chandra Engagement and Communications group transitioned the sonification project from a rapid response to the COVID crisis to an ongoing and sustained effort. To date, 20 sonifications based on data from Chandra and other telescopes have been released. Each new batch of sonifications has received attention online, consistently performing very well in social media and landing in the top 25 trafficked pages on the Chandra server. Currently, 8 out of the top 10 videos on the Chandra Youtube page are sonifications. Most importantly, the sonifications received positive reactions from blind and low-vision communities.

In May 2022, NASA was planning its annual Black Hole Week, a five-day span when the NASA Universe social media accounts focus on black hole research. Chandra regularly contributes to this effort, and this year we coordinated the release of a new sonification of the data from the Perseus cluster. As sonification of sound waves that cannot be heard is a different type of product, our materials accompanying this release were written with particular care.

The initial release of the Perseus sonification last spring was a huge success. The public and media were once again captivated by the idea of these sound waves in space and their connection to black holes. As with the original 2003 release, it created a buzz around Chandra, X-ray astronomy, galaxy clusters, and other related topics, spawning dozens of articles, interviews, and podcasts, and driving a surge of web traffic to chandra.si.edu. Two articles in The New York Times were written about the piece, including one with a lesson plan for educators.

After Black Hole Week ended, we thought the attention for the Perseus sonification was over—and it was, at least until the NASA Exoplanets Twitter account posted a tweet on August 21. Not part of a coordinated campaign, this was a single tweet sent by the manager of that account on a Sunday afternoon. 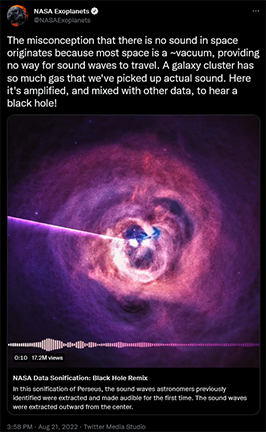 This tweet almost immediately went viral. By Monday of that week, it had over 30,000 likes, by Tuesday it had reached 300,000, and, as of this writing, the tweet has been viewed by over 17 million Twitter users, with about 500,000 likes, 128,000 retweets, and 36,000 quote tweets. On Wednesday, the story jumped from social media to traditional media. There were stories about the “black hole sound” in outlets ranging from The Today Show and Anderson Cooper 360° on CNN to The Boston Globe and the BBC. In all, there were about 1,200 articles devoted to this Perseus sonification story with an aggregate potential audience of two billion people around the world.

The second life (or third life, depending on how you count) for this story was surprising for us, but it came with a downside. Unlike the planned release in June, this story took off without the careful wording and explanations we had crafted. Some astronomers were concerned that the new round of popular articles gave misleading explanations about the sonifications, especially that they represented a direct recording of the black hole in Perseus. This problem was at least partly caused by the viral nature of this story. If a story is big enough and if it spreads quickly enough, a news outlet may assign the task of covering the story to any available reporter, rather than an experienced science reporter, which often means subtlety and nuance can be lost in the final article.

While the popular science articles may not have captured the full nuance of this particular story, sonifications nevertheless remain effective communication techniques. In particular, these are products that were originally developed for—and with—blind and low-vision audiences, and their response to the sonifications have been overwhelmingly positive.

To track how effective sonifications are in informing and engaging BVI audiences, in 2021 Arcand conducted an online research survey with about 4,500 participants. These results are currently being finalized for submission to a peer-reviewed journal, but preliminary analysis shows learning gains, high levels of enjoyment and engagement, and other positive responses across BVI and sighted audiences. Sonifications are a tool that can be helpful in reaching new, diverse, and underserved audiences, supporting NASA’s DEIA goals, and we are delighted to see how much interest they continue to generate.