The High Resolution Camera (HRC) celebrated its twentieth year as an engine of discovery and innovation. Now, as we enter the mission’s third decade, the community continues to find new and ingenious ways to use the HRC. This year, we highlight one such innovation from the community: transforming Chandra and the HRC into an ultraviolet observatory.

Drake et al. (2020) [ApJ 893 137] have devised a new method to use the HRC as a detector for extreme ultraviolet (EUV, 50–170 Å) emission from low-mass stars. Chandra is, of course, an X-ray observatory, and so the HRC is explicitly designed to block out UV photons via the use of an Al-coated polyimide film called the HRC UV/Ion Shield. This Al coating, however, has (by design) a non-uniform thickness across the HRC-S microchannel plates (see Figure 1), and its thinner regions permit a far higher transmittance of EUV photons than do the thicker regions. 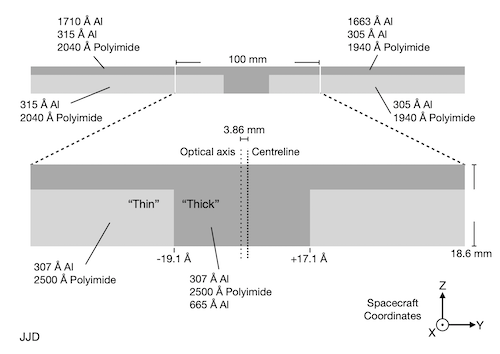 Figure 1: A schematic of the Chandra HRC-S UV/Ion shield (top), with the center segment enlarged for detail (bottom). The Aluminum-coated polyimide filter is much thinner in the light-grey regions surrounding the “T” shape, permitting far greater extreme ultraviolet transmittance. Drake et al. (2020) exploit this aspect of the design to effectively transform the HRC into an EUV detector. Figure adapted from Drake et al. (2020).

Drake et al.’s clever innovation was to exploit this thin region of the filter to intentionally capture EUV photons from LHS 248, a low mass, rapidly rotating, and magnetically active M6.5 dwarf star 3.6 parsecs away. This star’s EUV flux has remained too faint to be detected by any past dedicated EUV mission (such as the Extreme Ultraviolet Explorer / EUVE mission operating from 1992 to 2001). The team modified Chandra’s standard Lissajous dither to traverse a far wider path along the long axis of the HRC-S than normal (128″ × 16″, rather than the standard 40″ × 40″ dither pattern). Broadening the dither maneuver throughout the 10 ksec observation caused the source to repeatedly transition across the boundary separating the thin and thick portions of the UV/Ion shield, and maximized the time the source spent coincident with the thin portion. Continually alternating between the thin and thick portions of the detector enabled the team to compare the count rate of the source while “on” and “off” the thin region of the shield.

Figure 2: Red lines show the (modified) Chandra Lissajous dither pattern employed by Drake et al. in their observation of LHS 248. The UV/Ion Shield sits roughly 12mm above the surface of the HRC-S microchannel plate detectors – the hashed circle represents the size of the converging light cone at this height. This, in turn, was used by Drake et al. to modify the parameters of the Chandra dither to maximize the source transit time across the “thin” portion of the Al-coated UV/Ion shield. Figure adapted from Drake et al. (2020).

After accounting for intrinsic source variability, Drake et al. knew that the observed ~80% increase in count rate while the star was aligned with the thin film was almost entirely due to higher transmittance of EUV photons, enabling them to make the first-ever measurement of EUV flux from the star. While this one observation served as a proof-of-concept experiment, it carries broad and important scientific implications. For example, EUV emission from dwarf stars is a key observable in better understanding the loss and evolution of the atmospheres of planets orbiting those stars. This exciting result is one of many recent demonstrations of the HRC continuing to enable world-class science across the breadth of astrophysics. 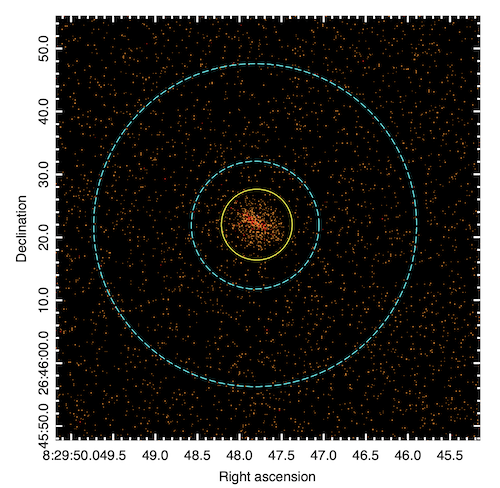 Figure 3: A combined X-ray and (for the first time) extreme ultraviolet HRC image of the low mass star LHS 248. The circles show source and background extraction regions used by Drake et al. Roughly 45% of the detected source events are indeed EUV (rather than X-ray) photons, enabling Drake et al. to obtain a measurement of the EUV flux from a star far too faint to be detected by past dedicated EUV observatories. This was done by repeatedly dithering the star across the boundary of the thin/thick regions of the Al-coated HRC-S UV/Ion Shield: the increase in count rate while the source was placed in the path of the thin region is largely due to increased transmittance of EUV photons. The star does not look like a normal point source because it was observed off-axis, where Chandra’s point spread function blooms and becomes asymmetric.

Meanwhile, HRC flight operations remain nominal. The instrument has been stable and healthy throughout the past year, and the Instrument P.I., Science Operations, and Calibration teams continue to optimize both the performance of the instrument and the robustness of our monitoring infrastructure. This includes a new real-time monitoring and alert system for incoming instrument telemetry, as well as a new code for improving the HRC background rejection algorithm. This code, called hyperscreen, will soon be publicly available for opt-in usage by the community. We also continue to make progress in investigating the long-mysterious issue of corruption in the HRC Secondary Science data stream. We have long known that it’s due to a byte shift anomaly, but we are now making progress in understanding its root cause at a hardware level. While secondary science corruption does not impact science data quality in any material way, we still wish to better understand its exact cause. We look forward to updating the community as progress on this front continues.

Finally, the HRC team—alongside the entire Chandra Flight Operations family—has responded swiftly to the COVID-19 pandemic. We are able to fully monitor the safety of the spacecraft and instruments from a mostly work-from-home environment, and robust contingency plans are now in place. Chandra and the HRC will continue to enable world-class science not only throughout the coming year, but hopefully throughout the decade of discovery to come.