Some don’t like it hot and that includes the Chandra instruments. Like most space-based observatories, Chandra requires quite a strict thermal control to perform at its optimum level. This means keeping key components, like the mirrors, detectors, and aspect camera within certain temperature limits. Changes in the mirror temperatures, for example, will induce thermal contraction and expansion stresses and can degrade imaging performance.

In space, it is much easier to heat things up than cool them down, and so observatories like Chandra are “cold biased”—without active intervention the key optical and structural components would naturally cool passively to below their operating temperatures. Control of the thermal environment can then be achieved using electric heaters.

This all works very well while the cold bias condition holds. Chandra is covered in shiny silver and gold-colored thermal insulation that largely reflects sunlight and is designed to maintain cold bias. However, over time in a space environment these insulation layers tend to degrade, leading to lower ratios of absorptance to emittance—more sunlight is absorbed and the spacecraft warms up. In Chandra’s case, such degradation of the “second-surface silvered-Teflon” outer layer of the thermal insulation has led to difficulties in maintaining the cold bias and in keeping the optics and detectors at optimum temperature. The most obvious impact of this that observers will have noticed has been an increase in pointing restrictions and decrease in dwell times, rendering some targets difficult to observe and scheduling much more tricky and restrictive in general1.

In a spacecraft as complex as Chandra, warming temperatures can also have unexpected and surprising consequences. Back on 31 August 2021, Chandra was about to execute ObsId 24785, calling for an insertion of the LETG into the light path to observe the quasar MR 2251-178. MR 2251-178 is one of the X-ray brightest active galactic nuclei in the local Universe and earlier HETG observations had revealed an absorption feature that appeared to be a strongly blue-shifted Fe XXVI Lyα line suggesting an outflow velocity of about 0.04c (Gibson et al. 2005). The new LETG observation was a guaranteed time one, led by Jelle Kaastra on the Instrument Principal Investigator team, to search for density diagnostics in its outflow. However, the LETG insertion did not complete successfully.

The two transmission gratings—HETG and LETG—are on hinges and essentially swing into and out of position behind the High Resolution Mirror Assembly. Readings of the angle of the LETG showed it had actually inserted, but had not triggered the microswitch that would tell this to the onboard computer. On September 1, the insert failure fault flag was cleared, paving the way to execute a retraction of the LETG on September 2 and a return to science observations—ones not requiring the gratings! An “LETG Anomaly Working Group”, or LAWG, comprising CXC scientists and flight operations engineers, together with experts from NASA, was formed to investigate the failure.

Already by September 2, a telling correlation had been identified. The grating insertion is driven by a stepper motor whose speed is controlled by an “oscillator” circuit—actually a capacitor discharging through a set of resistors. Data on the oscillator from past insertions revealed that the frequency had a small but significant variation with the temperature of the forward bulkhead of Chandra’s optical bench, close to where the electronics controlling the LETG insertion are located. In essence, the motor ran more quickly the warmer the electronics became, and by about 0.3% on August 31. The grating insertion software is based on running the insertion motor for a given time interval, so that when the motor runs fast compared with its nominal speed the grating reaches the insert position sooner than expected.

Further clues to the anomaly were found in some earlier near insertion failures. Once the grating is deemed very close to its insertion position, the motor speed is reduced to make gentle contact with the insert microswitch. On several earlier occasions, evidence was found indicating that prior to the gentle nudge into place the grating had bounced back off the mechanical stop that prevents it moving too far. A working hypothesis was constructed: The problem was in essence like that of slamming a gate—if slammed too hard, the gate can bounce back and fail to close.

It was down to the LAWG to ask the LETG “do you know how fast you were going?”.

The August 31st anomaly happened to coincide with one of warmest temperatures seen on the forward bulkhead of 97℉ (36℃ for those outside the US)—not unseasonably high toward the end of August in Cambridge, Massachusetts, but uncomfortable for the LETG drive electronics designed for temperatures in the 60’s and 70’s. The grating speed was then the highest it has been. It hit the mechanical stop and bounced back very slightly without triggering the microswitch.

QED, guilty as charged. Well, not quite. There might have been other explanations that fitted the evidence, and with due diligence the LAWG investigated a full fault tree to make sure the speeding grating hypothesis was the correct one. In short, the LETG was found guilty of speeding, but got off on the condition that it takes a software modification to allow for the speed-temperature dependence. The LETG got its license back and became operational once more.

So, why did the oscillator frequency increase with temperature in the first place? That is down to a modest little capacitor whose capacitance decreases with increasing temperature at just about the right amount to explain the grating speed change.

LETG Solves the Mysteries of the Universe

“Axion”. It does sound good. According to an article by Frank Wilczek, he got the name from an eponymous brand of laundry detergent, both because “axion” sounds like a subatomic particle, and it “cleaned up” a problem2. It was, of course, the “Strong Charge-Parity (CP) Problem” in Quantum Chromodynamics—that pesky implied conservation of CP symmetry because of the neutron’s tiny electric dipole moment! Anyway, like any nice theory that doesn’t really work, such as those in cosmology, you just have to find something with a flashy-sounding name to tag onto it to patch up the holes. For the CP Problem, “axions” does the trick—pseudo-Nambu-Goldstone bosons that ameliorate the CP violation.

Unfortunately, QCD axions should have a mass that is proportional to their coupling with electromagnetic fields and have been ruled out by laboratory experiments. But more general axion-like particles (ALPs) with very low mass (we are talking very low— 10-n eV where n could be anywhere from 2 and 6 or so) are still viable and arise in several extensions of the Standard Model, including string theory. They should have been produced in copious amounts in the Big Bang and could be the Dark Matter making up about 85% of the Universe whose true nature has eluded astronomers for decades.

Experimental searches for axions are ongoing on several fronts, and Astrophysics is playing a major role. In a magnetic field, axions should couple to photons, and the degree to which that happens provides a constraint on the axion mass. One expected signature would be apparent absorption features as photons traversing a magnetic field are converted to axions. Siske-Reynés et al (2022) set out to look for such a signature using the quasar H1821+643. This X-ray bright quasar lies at the center of the massive cluster of galaxies CL1821+643. While the magnetic fields permeating clusters of galaxies are at extremely weak, microgauss levels, Siske-Reynés et al (2022) point out that the combination of enormous path length and magnetic field strength by far exceeds what is attainable in laboratory experiments.

Combining 471ks of archival LETG+ACIS-S observations with 100ks of HETG+ACIS-S data, Siske-Reynés et al (2022) searched for ALP-photon oscillation features. And they found some expected broad and narrow iron lines and a smooth continuum bereft of other spectral features down to a limit of <0.25%. But the experiment still provided new constraints on the coupling of light ALPs to electromagnetism. The coupling, gaγ in the authors’ terminology, is essentially the constant of proportionality relating the mixing of photon and ALP states to the product of ALP and electromagnetic fields. The resulting constraints are shown in Figure 1. Assuming a plasma ratio of thermal to magnetic pressure of β=100, they excluded all couplings with gaγ > 6.3 × 10-13 GeV-1 for most ALP masses <10-12 eV. 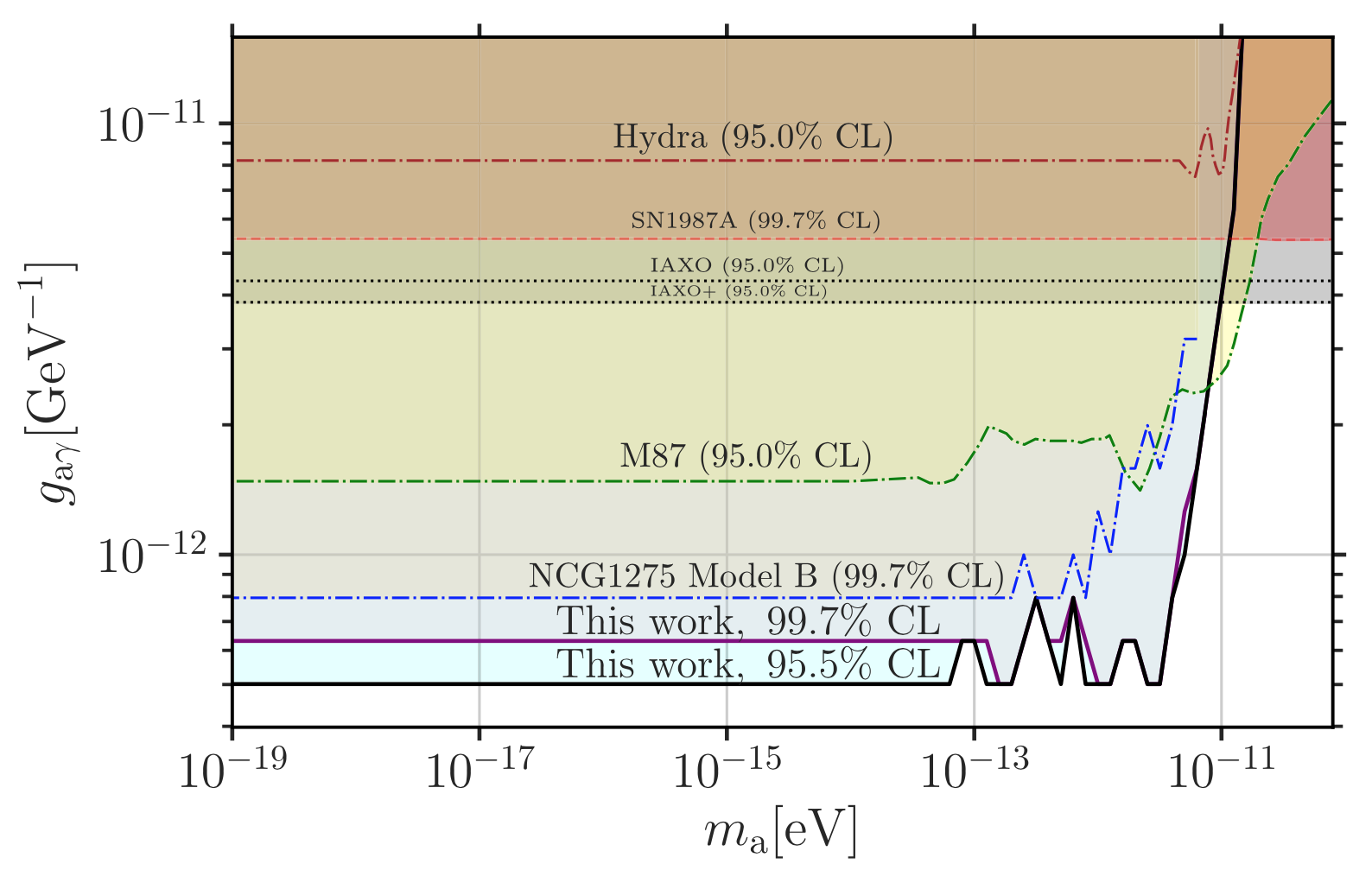 Figure 1: Exclusion curves inferred for the ALP-photon coupling, gaγ by Sisk-Reynés et al (2022). The shaded regions above each curve denote the parameter space excluded. The authors note that these are for a plasma β=100, and can be scaled to different pressure ratios by multiplying by a factor of (β/100)1/2. Previous most sensitive studies are also illustrated, together with the projected sensitivity of the next-generation axion helioscope IAXO, and its upgrade IAXO+. See Sisk-Reynés et al (2022) for further details.

In his article, Wilczek also relates how Steven Weinberg, who had independently realized the role of the particle, called it a “Higglet”, but agreed that “axion” was a better name. Hmmm, but Higglet is very reminiscent of Piglet, and that would have opened the door to a wonderful Winnie-the-Pooh extension to the Standard Model where there are Higglets, Woozles, Heffalumps, and even Backsons. Still haven’t found the Higglet yet? As Pooh said, “What’s wrong with knowing what you know now and not knowing what you don’t know until later?”

JJD thanks the LETG team and Dan Patnaude for useful comments, information and discussion. The LETG team extends warm thanks to the LAWG for all their hard work and altogether impressive diagnosis and recovery work that enabled LETG operations to recommence.