During Cycle 22 and the first part of Cycle 23 the High Energy Transmission Gratings Spectrometer (HETG) continued to perform nominally. There were 30 targets observed in this last period in 111 separate observations for a total exposure of 2.65 Ms. This total exposure is very similar to previous Chandra cycles and demonstrates that the HETGS is still well utilized for high resolution X-ray spectroscopy, and only ranks second in usage to the ACIS-S3, which is the main instrument for imaging spectroscopy onboard Chandra. Single exposures ranged from 7 to 62 ks with 97 observations in timed event mode and 14 observations in continuous clocking mode. The latter were very bright neutron star binary targets exhibiting exceptionally high count rates in the HETG 1st orders with some up to ∼300 cts/s. One outburst even exceeded 4700 cts/s. However, exposures of 62 ks are now very rare and difficult to achieve due to degradation of the telescope’s thermal, electric and mechanical performance with age, which puts enormous constraints towards scheduling observations and restricts the lengths of single exposures. Average observations are thus now more of the order of 15-20 ks. The target selection was very diverse and included low mass stars, high mass stars, cataclysmic binaries, low-mass neutron star binaries, high mass X-ray binaries, black hole binaries, supernovae, blazars, and active galactic nuclei.

Of these observations 6 were designated calibration observations. Observations of MKN 421 and 3C273 were performed to monitor the contaminant on the ACIS-S filters. Of specific importance are high amplitude (512 rows) dither observations of MKN 421 at low and high chip locations, which allow measurements of the contaminant over a large area of the ACIS spectroscopic array and map out variations of the contaminant’s thickness across the array. Contamination is still accumulating at a fast rate, which makes it now nearly impossible to observe the Fe L and O K band pass above 17Å. The recent Orion VLP produced less than 1% of total events above this wavelength within a total exposure of 1.6 Ms, most of these were background. Another one of the observations was Capella, which is now performed about every two years to monitor the health of the HETG instrument. 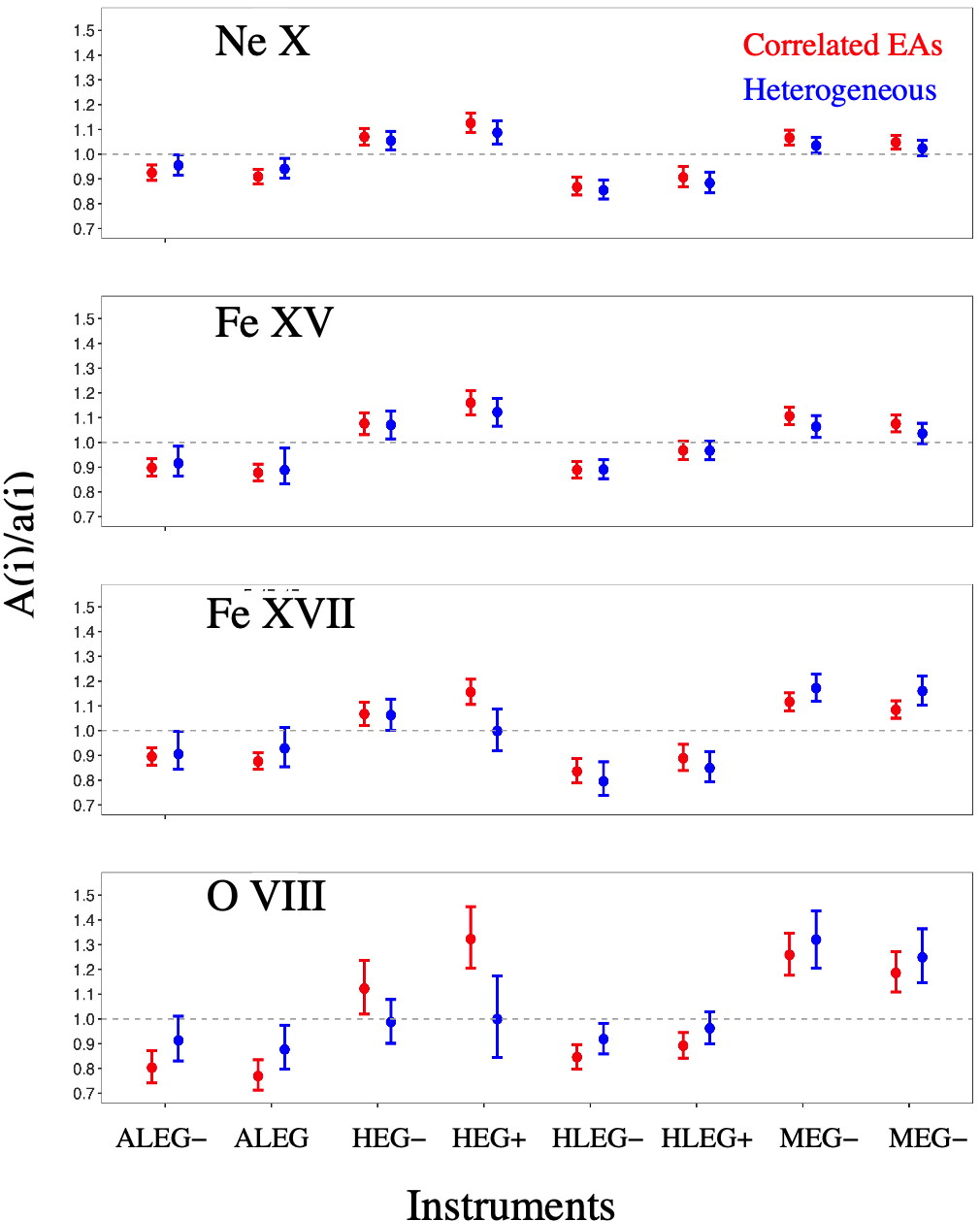 Calibration observations of Capella were used to assess the internal cross-calibration of the Chandra grating spectrometers in first order in a Concordance analysis (for details see Marshall et al. 2021). Results from this Concordance analysis are shown in Figure 1. Effective area corrections for the LETGS are generally negative, those of the HETGS positive. The ±1 orders generally agree well for all instruments and wavelengths. This study relates well with ongoing HETGS calibration activities. After verification of the HETG 0th order effective areas within 5-8% depending on bandpass, calibration is now looking at the 2nd and 3rd orders in MEG and HEG, The Chandra archive now includes enough long exposures of HETG sources that are not piled up in first orders to verify higher orders to a similar accuracy or better. Specifically the above mentioned Orion VLP provided a valuable data set to perform this task. Other sources in the archive are PKS 2155-301, 3C273 and 4U 1626-67 to name a few targets involved in this task. It was found that the higher order effective areas have issues with respect to the first orders, in some areas deviations of up to 20% are observed. These effective areas are now re-calibrated with respect to the HETG summed 1st orders.

A small survey of embedded wind shock O stars by Cohen et al. (2022) models both the hot plasma emission and the continuum absorption of soft X-rays and derives the temperature distribution of the shock-heated plasma and subsequently the wind mass-loss rates of each star (Figure 2). The temperature distributions for each star’s hot wind plasma are very similar up to about 107 K. More than 90% of the soft X-rays from wind shocks in ζ Pup are absorbed and it appears that the now commonly known trend of X-ray hardness with spectral subtype in O stars is dominated by absorption effects. 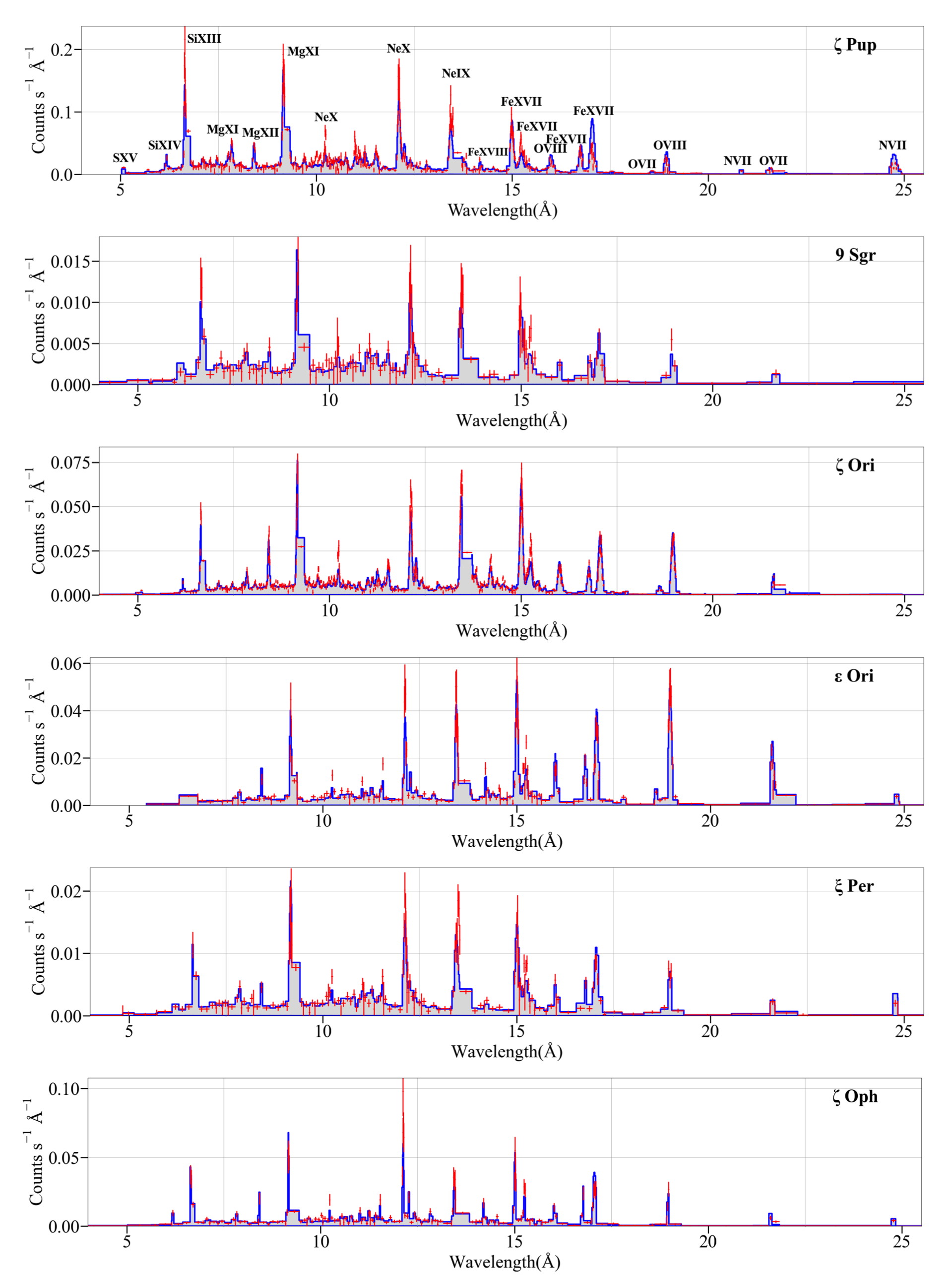 Two recent studies were conducted on very massive colliding wind binaries. In a very first high resolution spectral study of WR25 which contains a O2.5If*/WN6 primary and early type secondary in a 208 day orbit Pradhan et al. (2021) constrain line fluxes, centroids, and widths of various emission lines including some He-like triplet. At an orbital phase of 0.94 blue-shifts of about -300 km s-1 were measured with a decreasing trend towards short wavelengths. Zhekov et al. (2021) compared recent results from the massive Wolf-Rayet binary WR48a with archival data from Chandra and XMM-Newton. WR48a is thought to be a wide colliding stellar wind binary with a suspected period of 32 years. While only marginally blue-shifts were recorded, the X-ray emission and line properties appear to be variable over the time scales of years.

The eclipsing high-mass X-ray binary (HMXB) 4U 1700-37 contains a supergiant donor and presumably a neutron star in a very close orbit. In the case of 4U 1700-37 the neutron star is deeply embedded into the wind of the O6Iafpe-type donor star. This system had been observed out of eclipse during the very first Chandra cycle which produced strong highly ionized H-like and He-like line emission, but also strong fluorescence line emission indicating a dense and clumpy wind. The goal of this observation was to study the structure and physical conditions of this wind during eclipse (Martinez-Chicharro et al. 2021). The emissions during eclipse appeared highly variable. Figure 3 shows that the Fe K line fluorescence has not diminished much during high and low flux phases in eclipse compared to what had been observed out of eclipse indicating an origin from the bulk of the stellar wind. The He-like lines, especially from Fe appeared very marginal indicating an origin in the vicinity of the compact object.

Accretion disk winds and atmospheres in accreting compact objects are typically observed in the form of blue- or red-shifted bulk emission or absorptions. However, if the absorbing/emitting gas is located within few 1000*GM/c2, a small component of the absorber’s Keplerian motion contributes to the velocity-width of observed absorption lines. Trueba et al. (2022) demonstrates how such a velocity-broadening effect can be used to constrain the sizes of central engines in accreting compact objects via a simple geometric relationship. This method was applied to Chandra/HETG spectra of three ultra-compact and short period neutron star X-ray binaries. Results are shown in Figure 4. The authors use a two-zone model and fit asymmetric absorption lines with contributions from blue- and red-shifted absorption components from the accretion disk. It was stressed that the observed sensitivity will increase with further exposures, as well as the launch of future micro-calorimeter and grating missions.

The spectral evolution of the X-ray remnant of SN 1987A has been monitored on a yearly basis with the HETG since the launch of Chandra. SN 1987A is a core-collapse supernova discovered on 24 February 1987 in the Large Magellanic Cloud (LMC). Due to its closeness in the LMC at a distance of ∼51 kpc its extent can be spatially resolved >30 years after explosion. Its morphological compactness allows for dispersed high resolution spectroscopy integrated over the entire remnant. To date SN 1987A has been observed every 6 months with relatively short exposures plus four long exposures in the last 22 years. In this study Ravi et al. (2022) present a high-resolution spectroscopic analysis using the most recent deep (∼312 ks) HETG exposure and compare them to the last one taken in 2011. The authors find significant changes in the thermal conditions of the X-ray emitting plasma. Figure 5 shows the Me XI H-like triplet in 2011 versus 2018, which not only reflects morphological changes in the remnant but also changes in the physical conditions of the plasma. Substantial abundance enhancements were not yet observed, which might indicate that X-rays are not from the reverse-shocked metal-rich ejecta.

NGC 1275 is the brightest cluster galaxy in the Perseus cluster hosting a powerful active galactic nucleus (AGN). This AGN heats the central 100 kpc of the intra-cluster medium through a regulated feedback loop. The AGN was observed during Cycle 19 for 490 ks with the HETG by Reynolds et al. (2022). The authors confirm the existence of the Fe K fluorescence line which had been previously detected by XMM-Newton and Hitomi and is shown in Figure 6 in the left panel. They describe an analysis methodology combining HETG spectra, non-dispersive micro-calorimeter spectra and medium resolution CCD spectra to constrain sub-arcsec-scale extensions of the Fe K line region.

Another study by Uematsu et al. (2021) attempts to put X-ray constraints on the location of the AGN torus in the Circinus galaxy. The line widths of Fe K X-ray fluorescence lines that originate from the torus carry information on the radius of the line emitting region. The right panel in Figure 6 shows the Fe K fluorescence line in HETG in first (black), second (red) and third (blue) order, indicating that while the line is unresolved in first order, it appears resolved in third order. From this the authors constrain the inner radius of the torus to be 3×103 pc for a central black hole mass of 1.7×106 Msun, which is about three times smaller than previous estimates.