Gain Response of the HRC

Since launch, calibration observations of several sources have been taken regularly with the HRC to monitor the detector's performance. Analysis of these observations, examining the median source PHA as a function of time, reveals gain fatigue in both the HRC-I and HRC-S. In the HRC-I, the decline is roughly 30% at the aimpoint and smaller (10-20%) at the offset positions monitored (see recent memo by Posson-Brown & Kashyap (2007) and older memo by Posson-Brown & Donnelly (2003)). In the HRC-S, the median source PHAs show a large decline (roughly 10%) in the initial months of the mission. In subsequent years, there has been a decrease in gain of 2-10%, depending on the position on the detector, giving total declines of roughly 20% at the aimpoint, 12% along the LETG dispersion line on the central MCP, and 18% along the dispersion line on the wing MCPs. (See memo by Posson-Brown & Donnelly (2003) for analysis at the aimpoint, and memo by Pease & Drake (2003) - also available as HTML - for analysis at the aimpoint and along the dispersion lines.)

To date, the gradual lowering of the gain has not had any effect on the quantum efficiency (QE). In May 2004, members of the instrument team, operations group, and calibration team for the HRC met to discuss the possibility of addressing the gain degradation by adjusting the voltage on the detector and/or shifting the aimpoints. However, it was decided that action is not necessary at this time since the science done with the detector is not threatened by the gain fatigue. We continue to monitor the gain closely, and will take appropriate measures if science done with the detector becomes endangered.

The gain evolution affects the pulse height amplitude (PHA) values. These can be corrected using the gain correction maps to obtain location and time independent pulse invariant (PI) values. The PI values can be used with the HRC Response Matrices for calculating hardness ratios and quantiles. In addition, for the HRC-S, the PI values are used to filter HRC-S/LETG data to reduce background, as outlined in the memo LETG/HRC-S Background Filtering with CIAO and corresponding CIAO thread. The effect of the gain fatigue on PI filtering is currently under investigation, but results from the "light" filtering are still safe to use.

We have also developed a series of time-tagged gain correction maps for the HRC-I, which will be available in the CALDB (v.3.2.5) after Dec 2006. These maps correct for spatial variations in the detector gain as well as the temporal variations in the PHA due to the gain decline. These maps are discussed in the memo "HRC-I Gain Correction" (Posson-Brown & Kashyap, 2007) and are shown below. Time-dependent gain correction maps for the HRC-S are under development.

Evolution of PHA Response in the HRC
J Posson-Brown, H Donnelly - May 2003

We have recently developed a series of time-dependent gain maps, which are described in detail in the memo "HRC-I Gain Correction" (Posson-Brown & Kashyap, 2007). These maps correct for the temporal variations in PHA due to the gain decline, as well as correcting for the spatial dependence of PHA by analyzing AR Lac calibration observations taken yearly at the aimpoint and 20 offset locations. We find that the spatial and temporal changes in the gain can be treated separately. We therefore first develop spatial correction factors by comparing the offset PHA profiles to the aimpoint PHA profile in each year. Then, by comparing the spatially adjusted PHA profiles from year to year, we calculated a linear time correction factor. Note that at the aimpoint, the gain underwent a rapid nonlinear change between Oct 1999 and Dec 2000, so care must be exercised when using the gain correction map for this period. The gain correction maps and their time of validity are listed below:

***Note: For data taken at the high voltage setting (i.e. before Oct 4, 1999), the hrciD1998-10-30gainN0002.fits map should be used. It is based only on lab flats and does not include the AR Lac-based corrections. For more information on the high voltage gain map, see Results for Individual Energies and Gain Response Histogram (black lines=entire detector, blue shading=central area)

The image below shows all the gain correction maps for the HRC-I, with the high voltage map in the upper left corner and the most recent maps in the bottom row. They are shown with a linear scale from 0.85-3. 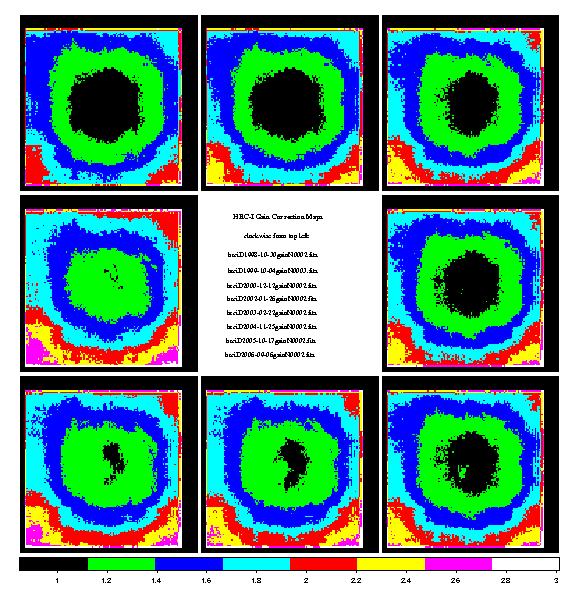 The most recent gain correction map for the HRC-S is shown below. This version was created by B. Wargelin in the summer of 2000, and has been in the CALDB since version 1.3. As with the HRC-I gain correction map, this map is used in standard processing to convert PHA values to PI values.