Below are the current calibration products for the HRC Flat Field Maps.

The most recent products are:

The following is a map of the relative QE response across the detector. It is a 5x5 boxcar smoothed pixel-by-pixel median of six normalized maps, each made at a different energy band (individual energy maps and more details of how this map was made are available). In this map, a value of one means the QE is the same as in the on axis model.

An analysis of the results from the ground calibration at the XRCF is also available.

The nominal flat field map shown above suggests that at energies above approximately 183 eV, the quantum efficiency of the HRC-I is uniform across the detector to within +/- 10% peak to peak, independent of energy. However, observations of HZ 43 show that at +10 arcmin off-axis there is a significant deviation for the nominal QEU at energies below 200 eV. A memo describing a study of the QE uniformity of the HRC-I at low energies can be found here. This work was also the subject of a presentation at the Chandra Calibration Workshop in Nov 02.

To illustrate the spatial structure of the HRC-S QE along the dispersion axis, we show below the modeled QEU for a rectangular strip located within the nominal extraction region of the LETG. This line is representative of a transection of the QEU data cube, for which wavelength is paired with LETG dispersion location unique to photon energy: 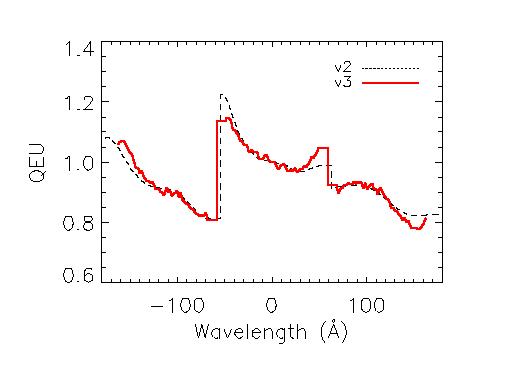